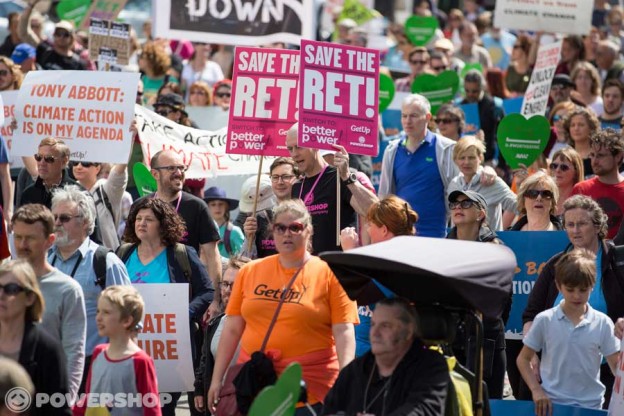 Powershop were proud to join over 30,000 people in Melbourne yesterday to support the #peoplesclimate mobilisation rally.

Powershop were on hand to help switch the attendees to support Better Power, a unique partnership with GetUp!

Check out the highlights in the video and on social media below:

Some of the best #peoplesclimate tweets are below, follow the journey from start to finish:

We had supporters of all shapes and sizes helping support the #peoplesclimate rally:

Lehmo got the crowd revved up at the State Library as thousands got set to march to Treasury Gardens:

We thought this would be a fun way to march down to Treasury Gardens:

Heads up everyone, this is how we're all going to be marching at the #PeoplesClimate today 😉 cc @getup https://t.co/T4v7O7fTjo

We got underway and started the journey with the 30,000 other #peoplesclimate supporters:

We loved all the characters that were leading the way for 30,000 other #peoplesclimate marchers:

Thousands showing their support for #PeoplesClimate in #Melbourne today. https://t.co/ySipwjjbfI

A familiar face helped show his support for the RET, Powershop and #peoplesclimate:

Things started to pick up as the 30,000 strong crowd approaced Spring St:

#PeoplesClimate rally today in #Melbourne is getting louder and louder as it approaches https://t.co/qoDZybzTvB

As the #peoplesclimate march arrived at Treasury Gardens, our staff quickly helped everyone make the switch to Better Power:

Powershop CEO got a big reaction from the crowd as he called on the ‘Big 3’ energy retailers to be held to account:

Ben Burge calls on the #PeoplesClimate to bring the Big 3 to account. Switch to #betterpower today! https://t.co/YDi1wh1Ulw

All in all, it was an outstanding day and Powershop were incredibly proud to be a part of it:

Read next: Powershop Australia Stands up for the RET!