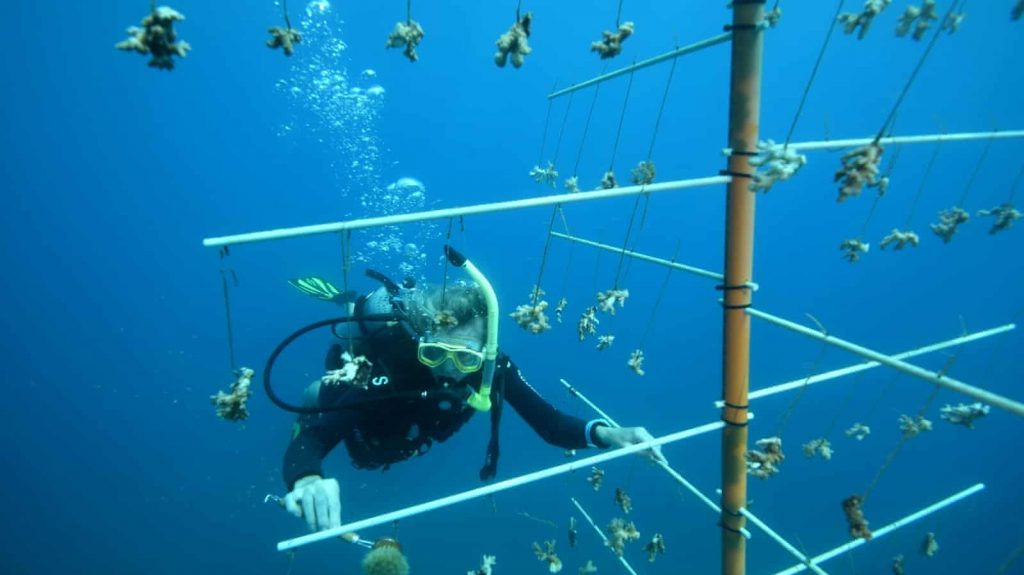 This article originally appeared in September 2020 on  The Guardian Labs

Inside the Reef Restoration Project: how more than 3000 “incredibly resilient” corals were planted back onto the Great Barrier Reef, funded in part by Powershop’s environmentally minded customers.

“Dad, it’s dead,” said the son of an Irish electrician floating serenely above an Australian coral reef the size of Germany. The Great Barrier Reef, one of the world’s natural wonders, had revealed itself to six-year-old Khai McKenna as white, lifeless, and desolate.

That was in 2016. Two further mass-bleaching events have since occurred, where sustained spikes in sea temperatures during historically unusually long, hot summers cause coral to die en masse. A global ecological horror movie, showing just off Cairns.

Fortunately, Khai’s dad wasn’t just an electrician. Dive master Gary McKenna is now the Nursery Operations Director of the not-for-profit Reef Restoration Foundation (RRF)—an innovative project aimed at seeding the Great Barrier Reef with heat-resistant corals. Then, McKenna was hoping to share his passion for the ocean. Instead, Khai’s dismay got Gary thinking.

An avid marine aquarium hobbyist, McKenna was accustomed to buying pieces of live coral, cutting them into smaller fragments, then growing the pieces in tanks at home. “His notion was that, if it worked in an aquarium, then we should also be doing on the Great Barrier Reef in its time of need,” says Ryan Donnelly, the RRF’s CEO.

Having once worked in a coral nursery in Thailand, McKenna’s research revealed that similar propagation—using corals that had evolved to survive in warmer water—was being trialled to bolster the resilience of reefs in Hawaii, Florida and Cuba. “I started approaching people to do the same here,” he said. But speculative scientific research is expensive. “They laughed at me and asked if I had a board of directors.”

He didn’t. But four years later, McKenna has something better.

With two active coral nursery locations in far north Queensland, Donnelly and McKenna’s Reef Restoration Foundation is now one of the world’s leaders in the developing science of fostering reef resilience against warming seas.

So far, the RRF has progressed without a single dollar from the public purse. To date, says Donnelly, the program has cost $440,000—entirely funded by community and corporate backers.

Significantly, the contributions of one of the RRF’s primary supporters, Australian carbon-neutral energy retailer Powershop, were directly provided by their customers who chose to contribute a small premium on top of their bills that could be put directly to the cause.

Indeed, the company’s model of voluntary contributions proved so popular that they were able to double their funding. Having provided a $60,000 grant in October 2019 to build an underwater coral nursery off Fitzroy Island, an additional $72,647 grant was delivered in June 2020—helping the RRF double its impact by establishing another nursery on Moore Reef (more on this in a moment). It’s testament to the gravity afforded to the reef’s plight not just by scientists, but by the public and environmentally conscious organisations at large. And while the RRF’s progress has been impressive, their urgency is palpable.

The timing of Khai McKenna’s first experience of the reef had been momentous. “On average, across the Great Barrier Reef, one in three corals died in [those] nine months [of 2016],” said Terry Hughes, Australia’s leading expert in coral reef decline. “You could say [the ecosystem] has collapsed.”

The nascent organisation moved quickly. By 2017, the Foundation had received the first permit granted in Australia to harvest, propagate and plant coral in a World Heritage area. They harvested 24 local corals that had endured the bleaching and cut them into 246 pieces. These were attached to six floating underwater frames, called ‘trees’, where they could be more easily monitored even as greater water flow and sunlight could turbo-charge their growth.

Today, “the latest news from the Powershop nursery is that, since the out-planting of half the coral colonies in April and the subsequent fragging of the remainder of the colonies back onto the tree frames, there are now 278 coral colonies ready to be replanted on the reef,” says Donnelly.

More than 3000 “incredibly resilient” corals have been planted back onto the Barrier Reef in total, each having grown on the tree frames at a rate of up to eight-times faster than the host and control colonies. Local ecology has adapted to the tree frames in open water, where they teem with species such as surgeon fish and bat fish.

The Foundation’s next step is to establish a third nursery at Moore Reef, off Cairns— a biologically rich reef complex set in an important marine park tourism destination, where their work can receive greater exposure.

Without government funding, the extra $60,000 Donnelly anticipates is required to sustain the project until 2021 will again have to be contributed by sponsors — be they corporate or community based. But the enthusiasm demonstrated by, for example, Powershop’s customers, show the hunger that environmentally minded Australians have for a little hope in difficult times. And their willingness to help out.

“I think these sorts of projects resonate with Australians – the Great Barrier Reef is a national treasure and something that we all want to protect,” says Powershop Program Manager, Monica Cheah. “We’ve only been able to do projects like this because we have an amazing customer base who support community initiatives. That has included supporting other Powershoppers impacted by the recent bushfires, because community matters to them. All of these programs are an ode to how consumer power can keep communities connected, and connect them with their environment.”

Be it the frenetic pace of the Black Summer bushfires or the slow-motion train wreck of the Great Barrier Reef’s degradation, Australia’s vulnerability to climate change has never been more apparent.

Only with more work like the RRF’s will a third generation of McKennas be able to dive in, look down, and echo the words of a different horror movie. One with its own electricity-adept scientist, desperately attempting to re-animate his subject.

Written by The Guardian Labs in Partnership with Powershop

Find out more about the program

Read next: How to empower your kids to make a difference on climate change

Read previous: How to do a WFH audit to save money and reduce your carbon footprint